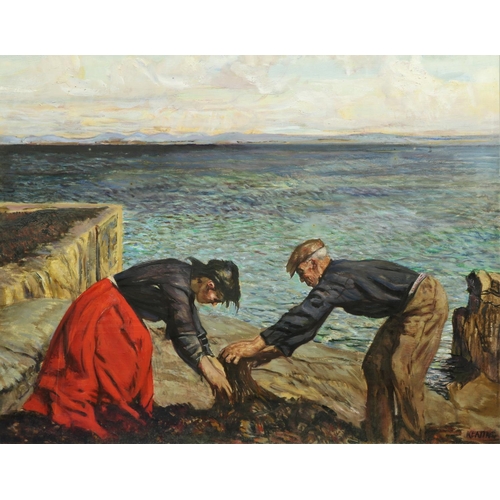 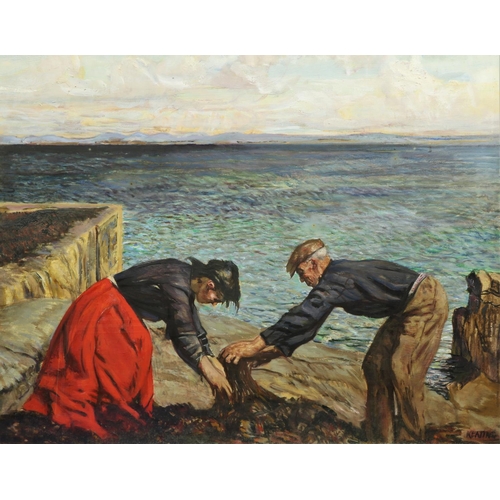 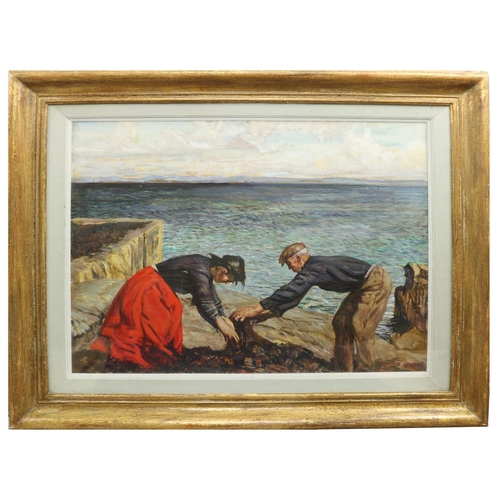 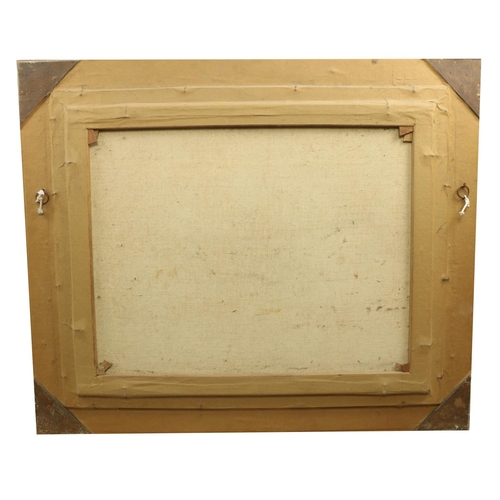 Seen in profile, standing on a rocky foreshore on the Aran Islands, a man and a woman are gathering kelp. Keating has depicted an aspect of island life that involved back-breaking work, with both figures bending forward as they tug at the seaweed. To the left, a pier juts out into the sea, while in the background, an expanse of wind-whipped sea is finely painted, with flickering brushstrokes of blue and green. In the far distance can be seen the pale blue peaks of the mountains of Connemara. A dark area of sea near the horizon hints at rain. Gathering kelp was an important part of subsistence farming on the Aran Islands, and it also generated additional income, as iodine that could be sold to pharmaceutical companies—iodine is a vital chemical for treating thyroid deficiency and is also a valuable antiseptic. Collected on the seashore after storms, the kelp was loaded onto the backs of donkeys. When access to the shore was difficult, it was packed into square wicker baskets, secured to islanders' backs with straw ropes, and carried by them up onto dry areas of limestone rock. In his book The Aran Islands, published in 1907, John Millington Synge described the process: “At the south-west corner of the island I came upon a number of people gathering the seaweed that is now thick on the rocks. It was raked from the surf by the men, and then carried up to the brow of the cliff by a party of young girls. In addition to their ordinary clothing these girls wore a raw sheepskin on their shoulders, to catch the oozing seawater, and they looked strangely wild and seal-like with the salt caked upon their lips and wreaths of seaweed in their hair.” The kelp was then stacked in large ricks, protected from rain with a covering of straw, and left to dry for several months.  Synge again described the process: “The seaweed is collected from the rocks after the storms of autumn and winter, dried on fine days, and then made up into a rick, where it is left till the beginning of June. It is then burnt in low kilns on the shore, an affair that takes from twelve to twenty-four hours of continuous hard work, . .” The kelp was then allowed to cool for several days: the iodine contained within molten and solidified kelp. In Synge’s day, it would fetch four pounds a ton. Seaweed was also used to create a fertile soil in which potatoes could be grown. Island fields were made by laying down a mixture of sand and seaweed, then covering it topsoil, the field bounded with walls of stones gathered from the karst limestone landscape.
Dr. Peter Murray, 2022 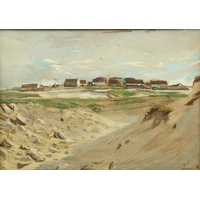 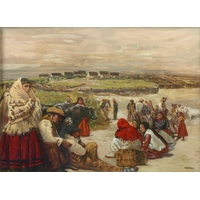