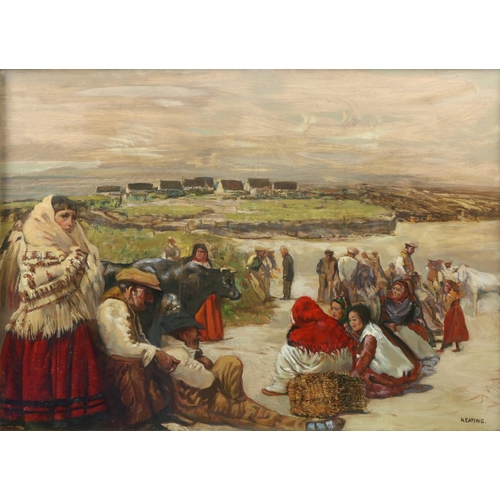 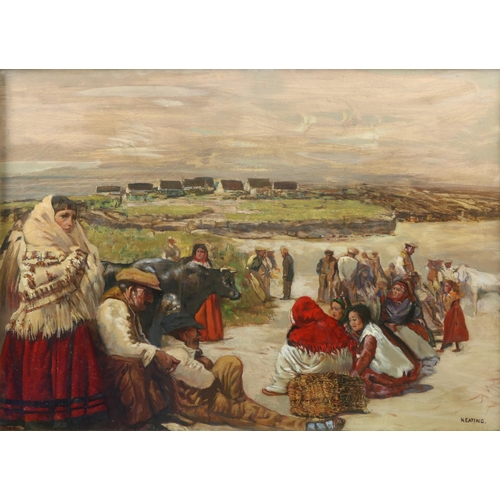 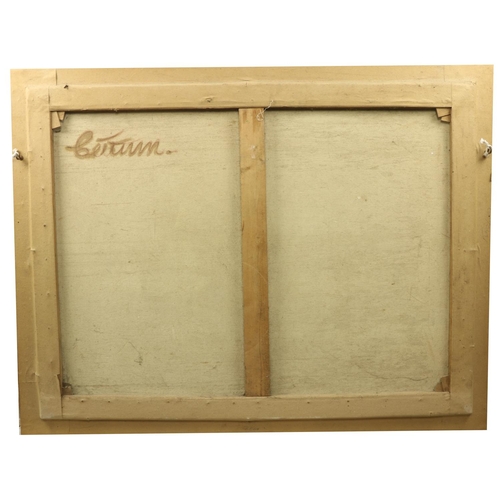 On a wide expanse of beach, on one of the Aran Islands, a group of islanders have gathered, waiting for the steamship “Dun Aengus” to arrive from Galway. The scene depicted may be at Killeaney or Kilmurvey on Inish Mor island, although the topography suggests Inis Oirr, the smallest of the Aran Islands.  There was a pier at Inish Mor, but it could not be used by the large steamer, and so cattle and people had to be ferried out on currachs. In Keating’s painting, a white horse and a black cow are ready also to be brought to the ship. Transporting livestock was not easy; cattle would be towed behind curraches, swimming as best they could, before being lifted on board using block and tackle. Keating was scrupulous in his depiction of both the men and women’s clothing. The dress of the islanders had essentially remained unchanged for centuries; the women wore either red or white hopespun shawls, and red flannel petticoats.  The men wore white flannel shirts, and waistcoats. Madder, lichens, and indigo were used as dyes, and the men’s clothing was generally either indigo, natural wool colour, or grey flannel. The men often wore wide-brimmed 'Tam O'Shanter' hats. Aran islanders were largely self-sufficient in terms of clothing. Woollen jumpers were knitted by hand and there were looms for weaving tweed.

From early in his career, Keating painted scenes set on the Aran Islands. He does not overly heroise the people of Aran, but evidently admired, even revered, the traditional way of life preserved on the islands. There is often a theatrical quality to his paintings; they are like tableaux, scenes from Riders to the Sea or In the Shadow of the Glen, two plays by Synge set on the Aran Islands. This is not a coincidence. When Synge first visited the islands in 1898, he brought a camera to photograph the people and their everyday life. On his return to Dublin, his teenage nephew, Francis Edmund Stephens, developed the negatives. Over the years, Francis, or Frank, Stephens also began to visit the islands and take his own photographs. Using glass plate lantern slides, Stephens, who worked as a teacher, gave illustrated talks on the Aran Islands, at cultural events in Dublin. (His photographs are now in the library of Trinity College.) A characteristic of Stephens’ photographs is that men often turned their back to the camera. They did not wish to be photographed but were reluctant to ask the photographer to cease his work.

This reticence appears also in Keating's paintings, where men are often depicted from the side, looking introspective, or else standing with their backs to the viewer. In this painting, while there are people chatting in the background, the main figures seem isolated and lost in their own thoughts. When Keating depicts figures side by side, often there may be little or no connection between them. In his Men of Aran, painted in the mid-1930’s, five men, standing and seated, are depicted in profile, all looking in the same direction, while each man appears to be deep in thought.  There is more interaction between the men gathered on the beach in Slán Leat a Athair, a large canvas painted in 1936 and now in the Ulster Museum. Keating was not in search of glamour but preferred to depict people who had lived through hard times, and whose life experiences were etched in the lines in their faces. In his portraits of islanders, eyebrows are emphasized, as are deep-set eyes. He delighted in a realist approach that emphasized lines, wrinkles, and ruddy cheeks. Although he visited the Aran Islands frequently, in later years Keating often used photographs, such as those taken by Stephens, as source material. The use of such mechanical aids did not have a deadening quality on his art and this painting is characterised by his expert use of paint, applied in gentle layers of browns, russets, and bright red colours, set against a pale background of sand. There are superb passages of expressive paint, in which figures and animals are suggested, rather than represented in detail. The sky is also pale light ochre, grey on the horizon, with a hint of pink. The rugged landscape of the island is captured in vivid brushstrokes of green and grey. 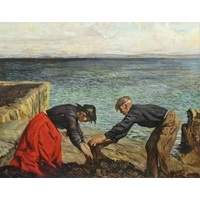 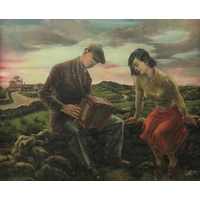