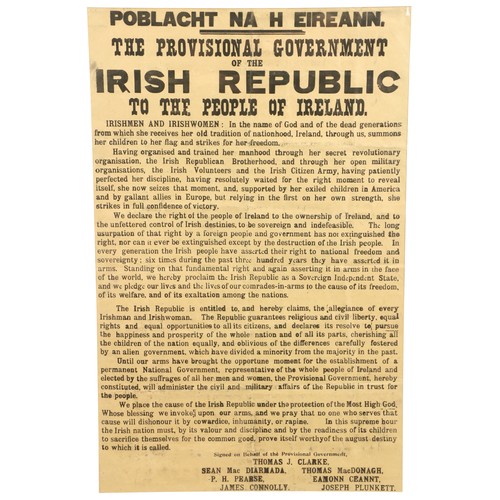 The Corner-stone Document of Irish Freedom

1916 PROCLAMATION OF THE IRISH REPUBLIC


An Original Proclamation, ''Poblacht na hEireann / The Provisional Government of the Irish Republic to the People of Ireland, Printed at Liberty Hall, Dublin, under the protection of soldiers of the Irish Citizen Army, on Easter Sunday, 1916, and red from the steps of the General Post Office, O'Connell St., Dublin on Easter Monday morning by P.H. Pearse, in the presence of the other signatories of the document, thereby heralding the Rising, and Ireland's advance towards self -determination. Single broadsheet, overall size 30 2/16'' x 20 2/16'', width of printed lines, 18 ?'', printed text 29 1/16'', on poor paper with smudging and uneven inking, some minor tears, and creases. As emphera, w.a.f.

The most important document in Irish History, one of an amazingly small few known surviving copies, most of which are in Public Institutions. The Proclamation, the corner-stone of modern Irish history, the Irish Declaration of Independence, was probably the literary composition of P.H. Pearse, with some changes and amendments by James Connolly and Thomas MacDonagh. It was printed in Liberty Hall, Dublin, on an old ''Wharfdale Double-Crown,'' printing machine. The work commenced about mid-day on Sunday 23rd April and was completed approx. 1.00 on Easter Monday morning. James Connolly organised all arrangements. The printer was Christopher Brady and the compositors Michael Molloy, and Liam O'Brien all of whom had previously been employed in the work of printing ''The Worker's Republic,'' for Connolly. Mr. Brady who worked the machine throughout described his task as one of great difficulty. He found it hard to ink the type evenly and the rollers refused to maintain an even pressure, with the result that nearly all copies show much smudging in parts and faint printing in other parts. In the beginning an attempt was made to set the entire document at the one time, but it was found this was not viable as there was not enough type available, and it had to be set in two stages. Firstly, top half, from ''Poblacht'' down to and including the words? ''among the nations.'' Then bottom half, from ''The Irish Republic,'' .. to ''Joseph Plunkett'' The paper used was of the poorest quality, a cheap line which was purchased from Saggart Mills, and similar to that used on the ''Workers Republic.'' A print run of 2500 copies was planned, with the intention of supplying the country as well as the city. It seems unlikely however, because of the difficulties encountered in the work, dilapidated machinery, scarcity of paper etc., that anymore than 1000 copies were in fact printed. Finally the work of distribution was then handed over to Mrs. Helen Moloney, as ordered by Connolly. The type for the second section or bottom half was still in the press, when the British soldiers entered Liberty Hall, on Thursday 27th April 1916. Mr. Michael J. Molloy told the story of how he came to be one of the three men who printed the 1916 Proclamation, in an article entitled ''My Easter Week,'' published in the Evening Herald, on April 4th, 1966. In 1925, Mr. Joseph J. Bouche published a booklet, for the Biographical Society of Ireland which was a short history and a bibliography of The Proclamation. He examined the few available copies of the original from libraries etc., and this paper is now the definitive tool for ascertaining the true copies. A photocopy of the booklet accompanies this lot. He defined six main points from which the first issue can be identified: 1. Size of paper: approx. 30'' x 20''. 2. Quality and colour paper 3. Style of typography including wrong fonts and spaces 4. Measurements of form or type face, or length of line 5. Differences in spelling notably in the names of the signatories 6. Other typographical in exactitudes The above copy conforms in size, type of paper, etc., and contains all the typographical in exactitudes and irregularities called for by Bouch. It contains the 23 wrong font ''e'' as called for. It also contains the reversed ''e'' in the third ''the'' on the first line of the last paragraph. Also according to Bouch the spacing matter or bars between the lines frequently caught the ink and showed a line of varying lengths. This copy has one such line. In addition, this document contains further typographical errors which were missed by Bouche & other bibliographers, historians alike, & which on examination, are to be found in all other true copies of the original. These are three lower case ''t''s. This copy also displays clearly that the original Proclamation was in fact printed in two parts, as the distance between the last two paragraphs, etc., and the top half again varies in size. The above example is a very clean copy, slightly frayed at left hand edge, without loss, a few minor tears, one larger tear without loss, repaired, fold marks as usual, but a much better than average copy, mounted and framed.

Provenance: Purchased by present vendor some years ago from a leading Dublin book-dealer.

* The authenticity of the above Proclamation, the founding document of the Irish Republic is guaranteed. The number of intact surviving copies is now believed to be not much in excess of 20, most of them in secure institutional custody. There can be no more desirable document for persons and institutions with an interest in modern Irish history. Copies in good condition are few and far between and we are pleased and privileged to offer this excellent example.

Some tears and repairs; minor loss to the periphery not affecting text; fading to edges - See detailed images.

Watch Lot
Sell One Like This
Prev Lot
View All Lots
Next Lot
Closed
Auction Date: 6th Dec 2022 at 10:15am 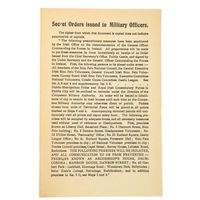 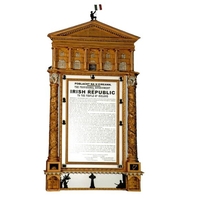