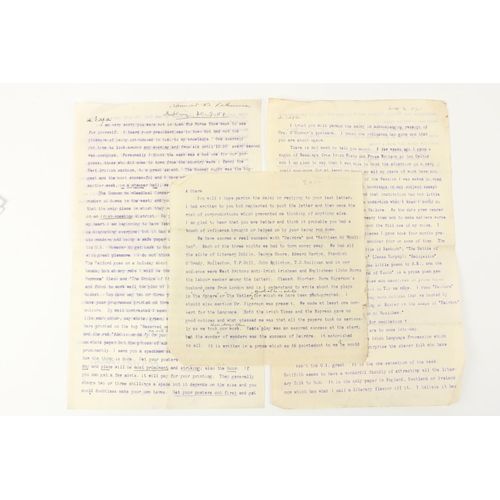 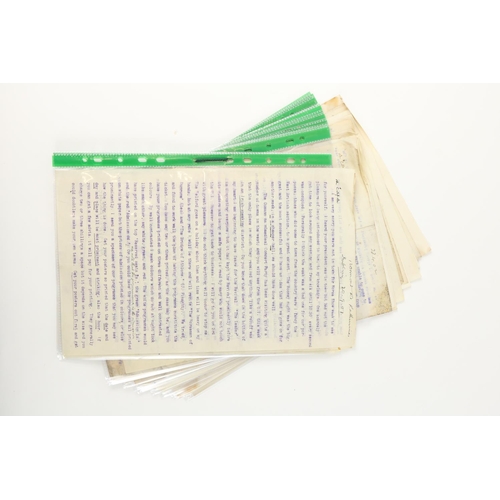 Fay (Frank, Prionsias Ó Fathaigh, 1870-1933).  An important file of original unpublished letters to the Gaelic League activist Donal O’Connor, evidently a close friend. There are seventeen TLS, 1901-03, all but four dated, mainly discussing Fay’s current activities and plans in the Irish theatre, at a time when he (with his brother W.G. Fay and their collaborators) was laying the foundations for what became the Irish National Theatre Society and the Abbey Theatre.

O’Connor’s replies are not present. Fay and O’Connor probably met through the Gaelic League, in which both were active around the turn of the century. The Fay brothers had been active in the Dublin theatre since 1891. Frank had a fine speaking voice, well suited to literary readings; Willie was a specialist in production techniques.

The following extracts give a flavour of the correspondence.

20.9.01:  ‘The Cumann na nGaedheal Concert Party has been visiting quite a number of towns in the west; and you will see from the U[nited] I[rishman] this week that the only place in which they received anything like a rebuff was in an Irish-speaking district.  Do you know that down in the bottom of my heart I am beginning to have fears for the Revival ..  You may have read in the last issue of Weekly Independent a little play in verse “The Children of Lir”.  The author is a lad not twenty and I think he will do fine work yet. He is full of enthusiasm .. I hear the Leader’s influence is on the wane.  I am glad and sorry because the U.I. will not reach the number of people who read the Leader.  But the latter is becoming insupportable ..’

24.2.02:  ‘A few weeks ago I gave a night of readings from Irish Poets and Prose Writers at the Celtic [Literary Society] and I am glad to say that I was able to hold the attention of a very small audience for at least an hour;  so all my years of work have not been in vain  ..  You may have noticed that we backed by Inghinidhe [na hÉireann] are going in for a big thing at Easter in the shape of [A.E.’s] Deirdre and a little play by Yeats, “Kathleen ni Houlihan”  ..  Isn’t the U.I. great .. Griffith seems to have a wonderful faculty of attracting all the literary folk to him ..  I believe it has penetrated into Trinity College and I believe that all that is educated and advanced in Dublin reads it .. You should read Prof. Mahaffy’s evidence re the Catholic University. He gives the Bishops some nasty knocks which they badly need.  They have too much power as it is and are strangling Ireland; heaven help us if we get a C.U.’


9.4.02:  ‘We have scored a real success with “Deirdre”  and “Kathleen ni Houlihan”. Each of the three nights we had to turn money away.  We had all the elite of literary Dublin, George Moore, Edward Martyn, Standish O’Grady, Rolleston, T.P. Gill, John Eglinton, T.D. Sullivan and in our audience were West Britons and anti-Irish Irishmen and Englishmen .. Yeats’ play was an assured success at the start; but the wonder of wonders was the success of Deirdre.  It astonished us all.  It is written in a prose which as AE pointed out to me, he could easily change to verse, it is so rhythmical.  Moore and Yeats had each shaken their heads at the play, but they had to give in, in the end.  On the first night Yeats, from nervousness, could not stay in the hall during Deirdre (he and AE have been life-long friends and he was genuinely anxious about the reception of the piece); but on the second night he sat it out, and at the close came behind in a state of wild enthusiasm and took back all that he had said against the play.  Yeats seemed to be struck by the acting which, in its method, approached a theory of his own.  Our object was to bring out the rhythm of each sentence to make the alliteration and assonance, in which AE’s poetry and prose abounds, give some of its effect to the audience and this, added to the fact that we played behind a thin gauze, and had no footlights, made for a remoteness of effect .. the gauze gave a wonderful softness to everything .. It also astonished me how readily an audience, mainly composed of Dubliners, took to this delicately poetic play and augurs well for what we hope to do for the future.  I do not think however that the Gaelic League have given us much support and they ought to have helped, seeing that we are paving the way for Irish plays in Irish, for which, say what they will, the time will not be ripe until we have an audience who can follow every word and so help along the absolute novices by which they must be played .. I have two poets in the Company, one of them will yet do big things in literature, and the other perhaps will be heard of too;  they are both aspiring dramatists and I think we shall probably get a play or two of theirs done.  If we succeed as we have begun, I have a hope that Dublin will see a surprisingly large number of plays dealing with Ireland in the course of time.  In this way I think you will admit that the time we have spent acting farces and reciting has not been wasted ..’

22.7.02:  ‘You have seen doubtless that Edward Martyn is about to give £10,000 to found a Palestrina choir.  Well perhaps it’s better he should encourage great art, Italian though it be, than give the money to swell the swag at the Vatican;  but we would be grateful to him for a loan of £800 to get a hall for ourselves and the cause.  Or even if we never got a hall, that amount would start and secure an evening paper for two years  -  an evening paper such as we all want to see that would put an end to humbug and, like the French papers, devote itself almost entirely to this country, as they do to France ..’

11.3.02:  ‘We have taken a little hall in Camden Street and have formed ourselves into The Irish National Dramatic Society with Yeats (I hope) as President and A.E. as Vice President.  The hall is not very large but I think we can do what we want to do in it .. At present we have the following plays in rehearsal, “Deirdre” (A.E.); “Kathleen ni Houlihan” (Yeats); “The Beggarman” (farce, Yeats); “The Hour Glass” (a Morality, Yeats); “The Sleep of the King” (Cousins);  “The Racing Lug” (Ditto); “The Laying of the Foundations” (Fred Ryan).  There is also “Cuchulain” by Miss Gore Booth and a comedy by Joe Ryan of the Celtic .. I have also heard part of what promises to be a very nice little play by a member of our Co., Mr. Columb, a dramatization of his story “In the Valley” which appeared in the U.I. the week before last.  With these we hope to do some play or plays in Irish.  Not a bad programme, is it?  One advantage of having a hall of our own is that we can play what we like in it and that we can play night after night for as long as we can get an audience .. No matter how much rehearsal we have, it is playing before the public and trying to make your work convincing to them that makes the actor .. One thing, we give no shoddy.  Yeats and A.E. are men of genius and the other authors are all sincere and have something to say ..’  -- and so on, for a further dozen or so letters.

Eventually the Fays were side-lined by the combination of Miss Horniman, Lady Gregory and Yeats, but their artistic legacy left an enduring mark on the Abbey and its style of performance.
A fine collection, entirely unpublished, telling the story of the Fays and their part in the rebirth of Irish theatre as it happened, month by month, without benefit of hindsight. It is of particular importance since the story has never been fully told from the Fays’ own point of view (W.G. Fay’s book Merely Players deals mainly with stage management and other technical matters). The letters should certainly be published.

Watch Lot
Sell One Like This
Prev Lot
View All Lots
Next Lot
Closed
Auction Date: 6th Dec 2022 at 10:15am 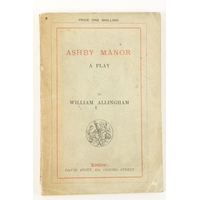