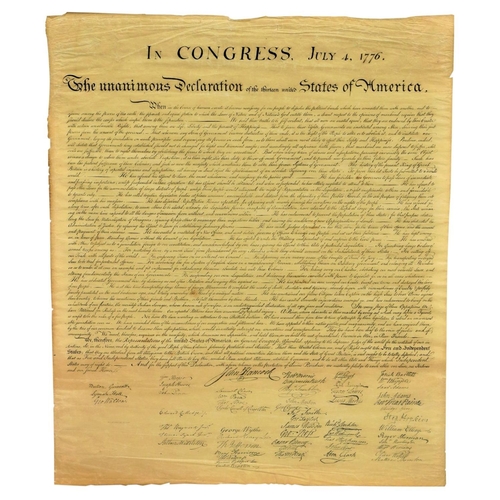 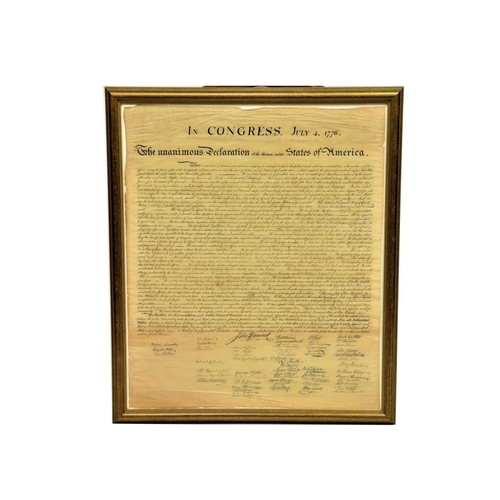 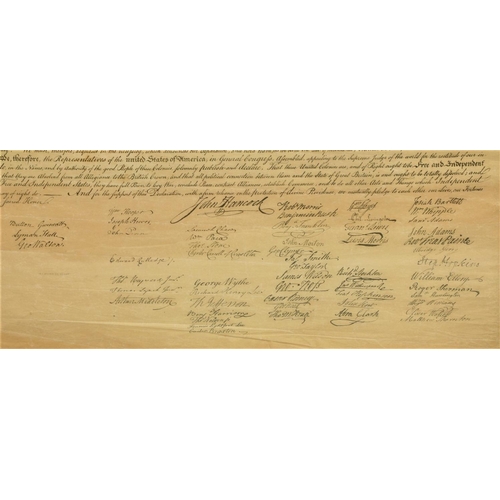 An original engraved facsimile copy of the Declaration of Independence of 4 July 1776,
Published in 1833 by Peter Force and W.J. Stone. This is one of approx. 400 copies still known from the edition of 4000 copies which he proposed to print, but after mounting expenses and increased production delays the subscription fell off to approx. 500 copies.


This copy with direct provenance to Charles O’Conor, the distinguished Irish-American attorney and politician.


"We hold these truths to be self-evident, that all men are created equal, that they are endowed by their Creator with certain unalienable Rights, that among these are Life, Liberty and the pursuit of Happiness.—That to secure these rights, Governments are instituted among Men, deriving their just powers from the consent of the governed,—That whenever any Form of Government becomes destructive of these ends, it is the Right of the People to alter or to abolish it, and to institute new Government, laying its foundation on such principles and organizing its powers in such form, as to them shall seem most likely to effect their Safety and Happiness.

The Declaration followed a period of stressed relations with Great Britain over trade and other matters.  It was drafted mainly by Thomas Jefferson, with amendments by Benjamin Franklin, John Adams and others, and was adopted on 4 July 1776 by delegates from 13 States assembled in the Second Continental Conference.  It provided the essential basis for the Treaty with revolutionary France agreed in 1778.

It is no exaggeration to say that this document changed the world, marking a decisive turn away from the era of unchallenged imperial expansion and the subjection of colonial peoples, and was thereafter a shining beacon to subject peoples everywhere, most notably the Irish.  Three of the 56 signatories were born in Ireland, with a further 8 of Irish descent.

The Declaration of Independence was initially published as a broadside, printed by Robert Dunlap, in which form it was widely distributed and read to the public. The source copy used for this printing has been lost. The best-known version is a signed copy that is displayed at the National Archives in Washington, D.C., and which is popularly regarded as the official document.  In 1820, when the ink on the Archives copy was seen to be fading, Congress commissioned the engraver William J. Stone to execute a full-scale facsimile, printed in 1823 in 200 copies on vellum, and issued to surviving signatories (including Jefferson and Adams) and other distinguished personalities.


It was issued to Charles O’Conor of New York, a son of Thomas O’Conor of the O’Conor Don family of Roscommon.  Charles' father, Thomas was sworn into the United Irishmen by Wolfe Tone personally, and went to America after the failure of the 1798 Rebellion.

Charles O’Conor (1804-1884) was born in New York, and was called to the Bar in 1824.  He quickly made his name as a trial lawyer; after his success in a major divorce and alimony case, he was presented with two silver vases  -  one by a group of 30 leading New York ladies, the other by sixty members of the Bar.  Both vases are now in the New York Law Institute Library.

He was active in Irish support groups, including one intended to support a Fenian rising in Ireland, and for many years he was a major figure in Democratic politics.  He was U.S. Attorney for the southern district of New York 1853-54.  After the Civil War he was senior counsel for the Southern leader Jefferson Davis in his trial for treason.  In the 1870s he was prominent in the successful campaign against William (Boss) Tweed of Tammany Hall.

In 1872 he was nominated for the Presidency of America by a southern Democratic group.  He declined the nomination, but his name still appeared on the ballot paper – the first Catholic to receive such a nomination.  After the 1876 election, he was advocate for his friend Samuel Tilden in his unsuccessful attempt to claim the Presidency, having won a plurality of the popular vote.

The present engraving came to light recently in a country house in the West of Ireland, where presumably it was brought by Charles O’Conor on a visit to his ancestral homeland.

An exceptionally rare and important document, truly one that has changed the world.

A superb memorial to a very distinguished Irish-American, and a confirmation and celebration of the Irish contribution to the constitutional development of the United States.  In excellent condition.

*W.R. Coleman, ‘Counting the Stones – a Census of the Stone Facsimiles of the Declaration of Independence’. Manuscripts vol. 43 no. 2 pp 97-105.

N.B. On careful examination The Auctioneers believe that this item is a copy of the Peter Force Edition of 1833, not 1823 as stated in printed catalogue. 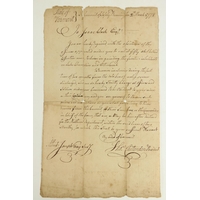 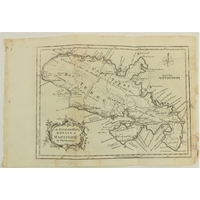