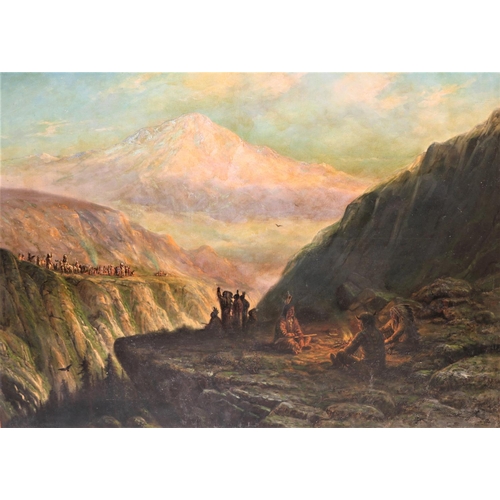 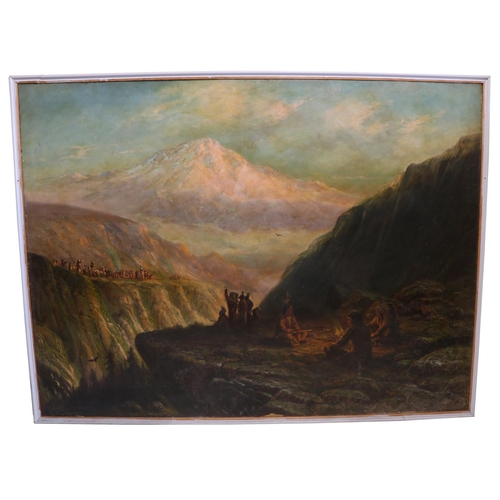 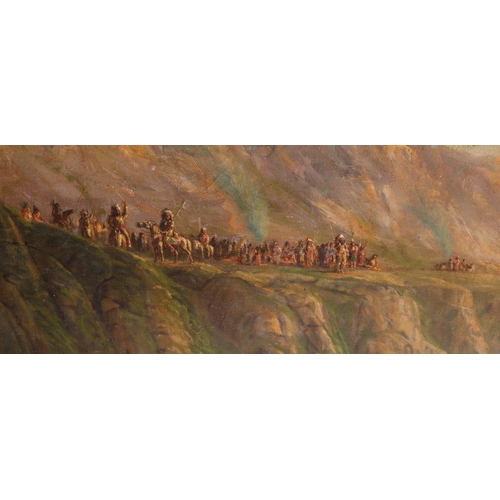 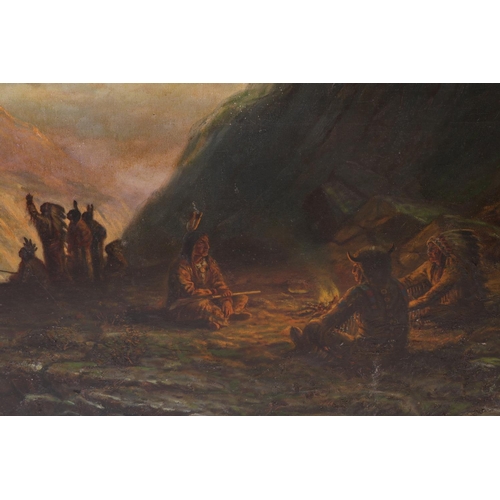 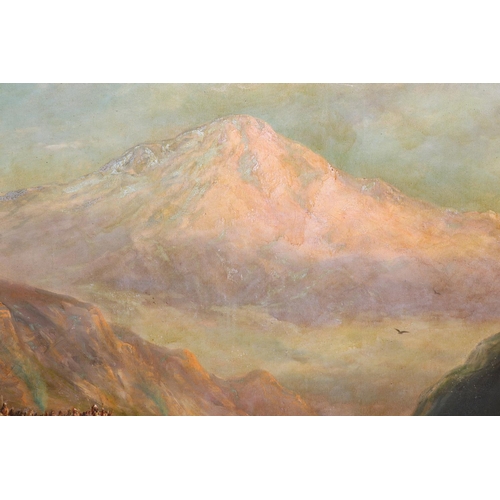 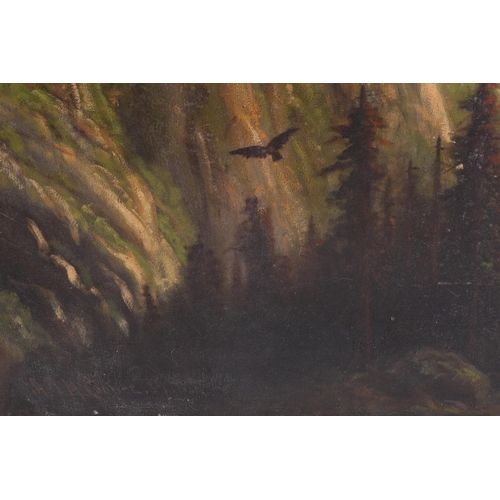 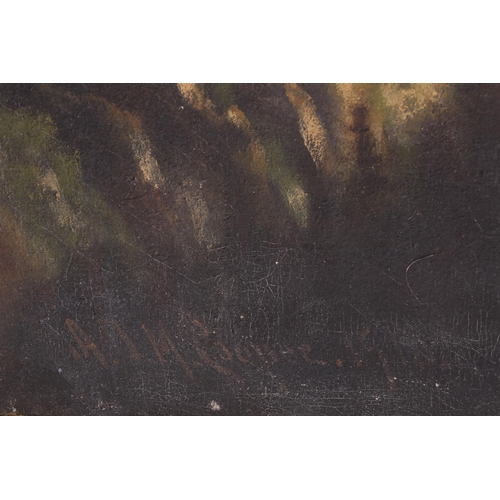 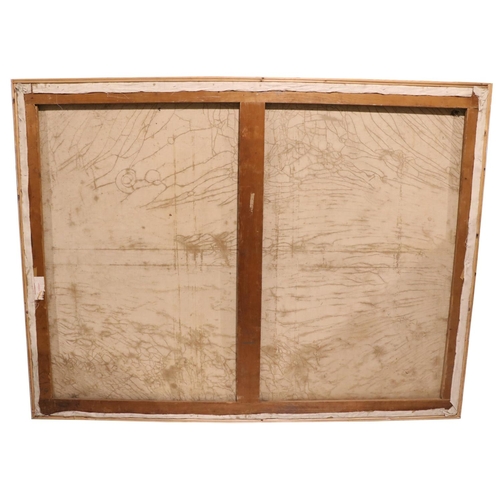 In 1876, an alliance of Native American forces, led by the Lakota Sioux leader Sitting Bull, defeated the US 7th cavalry regiment under General Custer, at the Battle of Little Big Horn in Montana. The battle took place eight years after the signing of the Fort Laramie Treaty, which guaranteed the Black Hills of Dakota remaining the property of the Lakota Sioux. The Treaty was not honoured, and so an alliance was formed between Lakota Sioux, Cheyenne and Arapaho, to defend their lands against incursions by settlers and goldminers. This painting by Astley David Middleton Cooper is traditionally held to represent the formation of this alliance, in Montana, with Eagle Peak mountain in the distance. On the left is Sitting Bull, wearing a headdress arrayed with upright golden eagle tail feathers. To the right is the Cheyenne chief  Two Moons, wearing a buffalo war bonnet. The third figure seated on the far side probably represents Chief Gall. In the background, across a ravine, can be seen the assembled Lakota warriors.

Over the course of a life that spanned the second half of the nineteenth century and the first quarter of the twentieth, Astley David Middleton Cooper produced many evocative paintings, depicting Native American peoples and the magnificent landscapes of North America. His paintings, of warriors on horseback, tipi villages and herds of buffalo, charted the decline of Native American culture as tribal lands were encroached upon by European settlers, and did much to popularise the image of heroic Native Americans, struggling to maintain their way of life. However, Cooper was also sympathetic to settlers and the hardships they endured. One canvas depicts an abandoned covered wagon, surrounded by grazing buffalo, while a narrative series illustrates a settler and his daughter, held captive by a hostile tribe, and the ensuing hostage negotiations. Several poignant paintings include Lakota Sioux warriors – models in the artist’s studio - looking at canvases that portray their disappearing way of life. Cooper’s paintings are characterised by close attention to detail, such as clothing, beadwork, eagle feathers and brightly-coloured woven blankets. He also produced landscapes featuring rivers and forests—including Californian giant redwoods—as well as decorative works depicting cherubs, models and classical figures.

Born in St. Louis, Missouri, Cooper’s father David Middleton Cooper was a leading Irish-born surgeon, while his mother, Fannie Clark O’Fallon was a grand-niece of William Clark, the explorer who took part in the famous trans-continental expedition of 1804. The artist George Catlin, who painted scenes of  Plains Indian life, was a family friend. Having studied art at Washington University, Cooper travelled widely, living with Native American peoples and recording their culture in paintings and drawings. He spent two years in Boulder, Colorado, producing drawings for Frank Leslie’s Illustrated Newspaper, before settling in San Francisco, where he built up a successful practice as a genre and portrait painter. Among his sitters was General Ulysses S. Grant.  In 1883 Cooper established himself at San Jose, building a large studio in an ornate Egyptian style. A sociable and popular figure in San Jose, Cooper often paid his bills at bars with paintings. He married late in life, in 1919, just five years before his death. His works can be found in many museums, particularly in the American West. In his Artists in California 1786-1940, the art historian Edan Hughes notes there are works by Cooper in the San Jose Historical Museum, Stanford Museum and the Oakland Museum. Relics of the Past, The Buffalo Head, a still life by Cooper in the Buffalo Bill Center of the West (Whitney Western Art Museum, Cody, Wyoming), includes portraits of Sitting Bull, Two Moons, Red Cloud and Chief Gall. 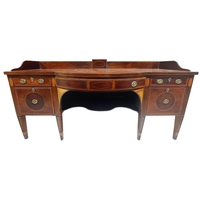 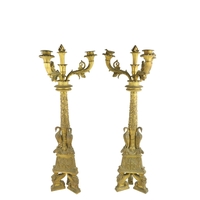